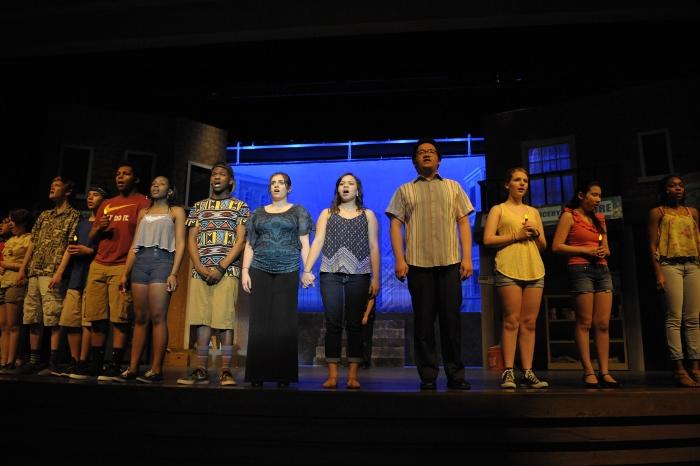 “Lights up in Washington Heights.” Long Reach students, theater director Marla Blasko, and techs behind the scenes put on a production that took the audience to a small neighborhood in Manhattan, NY on March 17-19th.  In the Heights tells a heart warming story of friends and family discovering where they belong and who they are.

It is a story that many of the performers could relate to.  “I feel like my experience at Long Reach, especially [in] the Fine Arts Department, has a similar feel of being one big extended family, much like the community in Washington Heights,” enthuses Senior Alex Donaldson.

As Usnavi, the main character of the musical, Donaldson’s sense of community allows him to bring emotion and emphasis to the setting of the block. Usnavi acts as the hub of the story as everything happening seems to revolve around him. Usnavi is in love with Vanessa, played by Imani Mallard. While he chases after her, trying to find where home really is, all she really wants is to get away from the barrio, or neighborhood. Theirs and other stories of the spanish-speaking residents are impeccably rolled together in the small barrio, which serves to question the true meaning of  “home.” Junior Diether Emolo agrees that the production “shows the closeness and togetherness of family and community.”

This musical was perfect to put on at Long Reach, the most diverse high school in the county.  “All of the stories are told to the tunes of hip-hop, salsa, and rap, music that connects with Long Reach students,” claims Director Marla Blasko. It connects with students who are trying to find their place in the world by conveying that home is where they make it. While it is still good to keep in touch with their heritage, it is also fulfilling to embrace where you live and find all of the things that make it unique.

While it was only put on for three days, the show took roughly three months to prepare for, but all the work is worth the final product.  “For the entirety of February and March alone, I have had 4-5 rehearsals a week,” claims Donaldson, “each one lasting about 2 hours and nearly all of them right after school.” Esmolo adds that many hours have been devoted by cast  “not only with the cast on stage at rehearsals, but practicing at home with the singing and choreography.” Donaldson concludes, “ watching In The Heights being built up after all this hard work has been a real treat.”

“It was definitely worth the time. I love coming to rehearsal and never get tired of the songs,” enthuses Blasko,  “I smile and cry, depending on the moment, but I always leave humming the songs. I love living in the world of  ‘The Heights.’”

There are also people who may not be seen on stage, but worked extremely hard behind the scenes. “Techs. Techs, techs, techs. Everything that goes on behind the scenes, set building, light cues, stage hands. Techs help with everything and get the least recognition for it,” Esmolo exclaims.

“No show would even be able to run without them,” informs Donaldson. “ all of us actors would be helpless as well.”

There are also a few other people who played a large part in pulling this performance together. Esmolo notes the important role Mrs. Blasko plays.  He noted how many things she is responsible for: “She’s had to make every decision, be at every rehearsal, and try to keep the entire cast in order.”

“I spend a lot of time communicating my ideas to the set designer and the tech crew as well as the choreographers so that everything is integrated and works well together,” Blasko informs.

Also, there are various student choreographers who assisted with the preparation of In the Heights  including Seniors Lauryn Anderson and Jordan Stanford. June Pompei, Long Reach’s chorus teacher, also assisted by handling the music. “Also, student directors Lauryn Anderson and Sophomore Berri Wilmore also have helped a lot during rehearsal,” Blasko adds.

Sure, watching the performance is always fun. Seeing what all of the hard work has added up to, but there is nothing like the experience of being in the cast and crew. Esmolo enthuses about how it’s great “meeting and hugging everyone in the cast. Everyone’s not always what they seem like at face value, and this seems like a great way to show it off.”

The whole cast was very excited to put on the musical In the Heights and is sure to be seen in their performances. Blasko would like to give thanks to “the cast for all their hard work and sharing their talent with [her].”

Before the show, the cast stood in a large circle praying to the patron of actors and fools, energies were high, and everyone was excited to put on the greatest show that they could imagine doing. They all empressed the audience with their high energies and outstanding performances.

“In the Heights was filled with highs and lows, great music, wonderful acting, dancing, and it was a joyful performance,” enthuses Allison Sneller, health teacher.

With musicals, “Some have happy endings, some are bitter sweet,” but there is nothing like the experience that makes the casts lives complete.