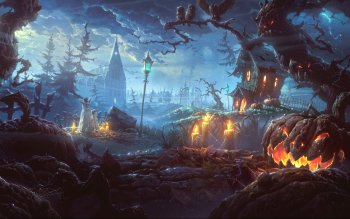 The Story of the Haunted Holiday

How Halloween Came To Be

Halloween, also known as Allhallowe’en, All Hallows’ Eve, or All Saints’ Eve, is a celebration recognized around multiple countries in the world. The holiday carries on a tradition where thousands of children and families across the world perform pranks, wander the streets at night dressed up in their scariest, funniest, and adorable costumes in search of candy and other sweet treats. This is one of the ways the holiday is acknowledged, whereas some use this day to honor the deceased and loved ones who are believed to return to home. You might ask, how did this tradition come about?

The holiday originated 2,000 years ago from the ancient Celtic Festival of Samhain, whose significance was to mark the end of the harvest season and the beginning of winter. The ancient Celts were a collection of  diverse tribes of mainland Europe who spoke the same language and followed similar traditions. Today, these areas in Europe are known as Ireland, the United Kingdom, and other northern countries.

On October 31st, the Celts believed that on this day,  the border between the worlds of the living and the dead blurred and signaled both death and rebirth. History.com states that they would “dress as animals and monsters so that [dead souls] would not kidnap them.” The purpose of this custom has been to fool spirits into not bothering those who are living. The festival lasted until November 1st, and celebrants lit bonfires in honor of the holiday.

Throughout many years, the holiday has been viewed in a number of ways by different groups of people. The Romans brought new fall festivals, and the English started the tradition of setting out foods for the spirits. The idea of trick or treating is said “to have been derived from ancient Irish and Scottish practices in the nights leading up to Samhain” according to History.com, and cake was known to be the treat. Also, during the middle ages, turnips with embedded coal would be carved and attached to strings and sticks–a tradition which still exists today, only we call them Jack O’Lanterns.

The Chritstians influenced the holiday to have more of a religious focus by naming November 1st “All Saint’s Day,” but the Celtic pagan traditions of the festival persisted. Southern colonies in America held early festivals in the fall and told ghost stories. As the Irish immigrated and shared ideas, their customs and superstitions were popularized. And by the 1800s, the holiday made its way to America, and developed to include celebrations with parties, games, food, costumes, and new symbolizations.

Our modern day Halloween has come from two thousand years of development, and in that time, one thing is certain: humans still love focusing on the border between the living, and the dead.