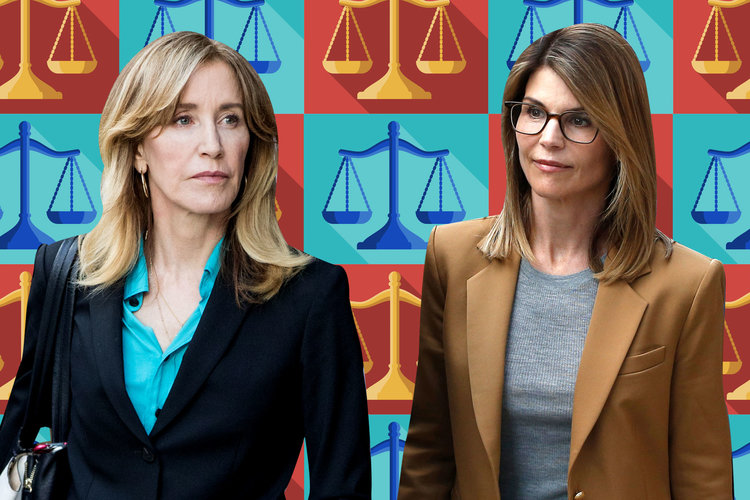 Lori Loughlin and Felicity Huffman, two of the high profile parents that were involved in “Operation Varsity Blues.” Photo courtesy of https://www.bravotv.com/personal-space/criminal-defense-attorney-explains-different-charges-for-felicity-huffman-lori-loughlin-college-admissions-scam.

Commit the Crime, and MAYBE do the Time

Why work hard when you can bribe your way into your dream college?

One year ago this month, the FBI arrested those two high profile celebrities and investigated 33 others who took part in the biggest college admissions scandal of 2019, “Operation Varsity Blues.” The mastermind behind the scam was William Singer, who conducted cheating through standardized tests such as the SAT and ACT exams.

Singer was a businessman who was able to bribe the proctors so that the students’ scores would come out exactly as he wanted it. Not only was the cheating in a testing environment, but he also bribed college coaches to make it seem as if the students were recruited for a certain sport they did not even play.

With a hefty amount of money, the parents made connections with admissions, teachers, and proctors as a way to get their children into top American universities. High-profile parents paid between $15,000 to as high as $25 million between 2011 and 2018 for higher test scores.

The money they used was obscured as donations to a non-profit foundation controlled by Mr. Singer, who faces up to 65 years in prison for the following charges: racketeering conspiracy, money laundering conspiracy, conspiracy to defraud the United States, and obstruction of justice.

Mr. Singer used his connections with testing coordinators, admissions officers, and coaches in order to advance those students into college unfairly. In contrast, Long Reach High School Senior Jessalyn Velasquez sees connecting with her teachers as a way for her to advance her academics rather than cheat the system.

She says, “being close with my teachers in the same major I’m interested in connects me to the right guides for which college I should attend, but being close and having these connections does not mean I should use them to help me cheat.” Velasquez expresses her anger: “You should get into college based on your merit.”

After these Universities’ involvement was revealed, teachers and counselors expressed their doubts about the college admissions process and education system.

Ms. Schreder, a world history teacher at Long Reach High School, says, “The colleges aren’t victims; there’s a larger problem with the education system and the amount of preparation given to students for college.”

She says, “The wealthy will always make excessive donations or find a way to get their children to attend a top college. There’s a bigger picture and focusing on this scandal blurs the problem of the lack of preparation in the secondary education system for students. We need to prepare these students by having a more rigorous class environment so they don’t feel the need to cheat.”

However, a guidance counselor at Long Reach, Mr. Siliko, believes that having a positive staff and student connection helps students prepare for outside of high school. He says, “Students having a connection to teachers or other staff that are masters of the student’s interests plants the seed for motivation and allows them to ask helpful questions.”

Velasquez agrees and says, “My relationship with my teacher that shares my interest in graphic design helps me so much that I don’t even think of trying to find a way around because of the amount of preparation that the teacher gives me.”

Siliko believes that the college admissions system is the ultimate reason that this scandal happened. He says, “The holes in the system come from the moral character of the administrators who look over each student’s college application.”

This means that those administrators’ values of fairness and equality when selecting students to attend their university plays an important role of who gets in and who doesn’t.

Velasquez says, “this impacted me deeply, especially since I’m a high school senior in hopes of getting accepted to the colleges I’m interested in.” She believes that “more students should care because it surely knocks down their chances of getting into their dream colleges.”

The parents in “Operation Varsity Blues” are facing the consequences of their involvement in the scandal. Felicity Huffman pleaded guilty and is facing 14 days in prison. Lori Loughlin and her husband, Mossimo Giannulli, have said they are innocent, but are facing 45 years in jail if found guilty.

Felicity Huffman was able to lower her sentence because she complied with authorities and admitted to her crime. However, Lori Loughlin and her husband did not plead guilty, and if they are found lying they can face a longer time in jail.

Education reporter Liz Willen wrote for The Hechinger Report that “In the face of such unfairness, it’s helpful to remember that higher education has always been a business, with admissions officers at selective schools beholden to trustees, wealthy alumni, college rankings—and, in many cases, ability to pay.”

Junior Alisha Khan lamented, “It’s like even if we have high GPAs and test scores, it doesn’t even matter because students who have more money are already ahead in life.”

Velasquez says, “They may think they cheated the system, but their children will lack life skills and wouldn’t know how to work hard for something in the real world.”