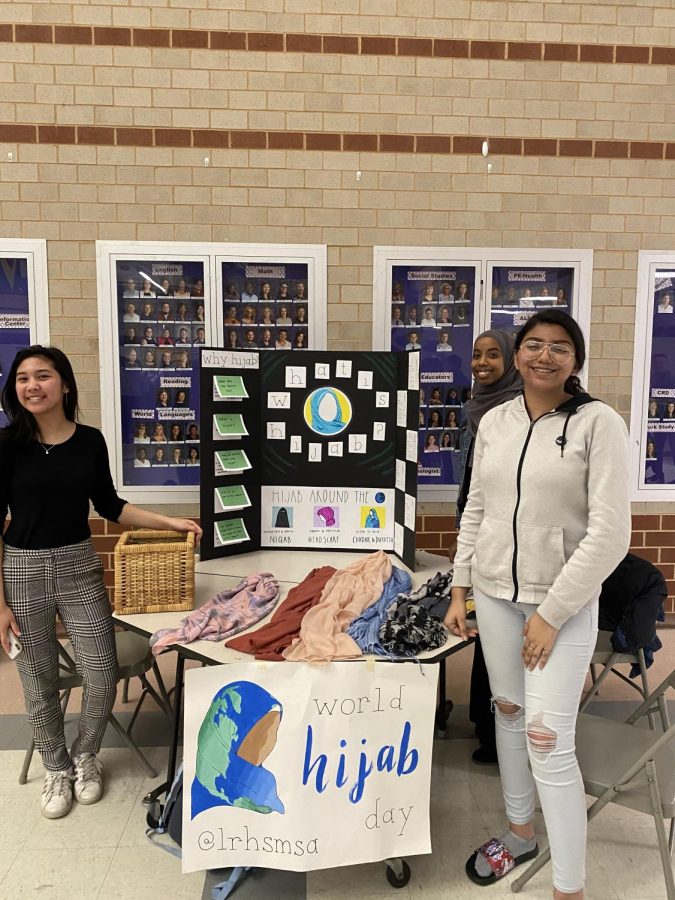 The Muslim Student Association at Long Reach High School is able to connect students through various scarves and shawls known as the hijab. Hijab comes from the Arabic word hajaba, which means to hide or screen from view or cover.

However, Long Reach does not want to obscure the national event, World Hijab Day, which was founded by Nazma Khan in 2013, and takes place on February 1st in 140 countries. This event is to encourage and promote awareness of the hijab and why people wear it.

Narmeen Sameer, a junior, and Seniors Iman Ahmed, Baheera Mariska, and Nareena Alzaben, who belong to the Muslim Student Association, helped to set up a booth in the atrium to inform their classmates of this event. The booth’s information included “facts about the hijab and pictures on how to style it,” Sameer said.

The information presented is important to help eliminate ignorance and stigma against the hijab. In America, these misconceptions surrounding the hijab can lead to discriminatory behaviors against it.

For example, “Muslim women and girls have been denied the right to enter public buildings, shopping malls, swimming pools, and amusement parks unless they submit to being searched by male guards or agree to remove their head coverings,” according to the American Civil Liberties Union (ACLU).

The Muslim Student Association wants to make sure discrimination against hijabs can be decreased at Long Reach High School to provide a more welcoming environment.

Ahmed says, “Some people assume wearing a hijab is forced, somehow a form of terrorism, and is a ‘hat.’” Ahmed continues, “the hijab actually represents modesty and is a personal choice.”

The term hijab has a religious association, but anyone of any religion, or even someone without a religious affiliation, can wear their form of a hijab.

Sameer says, “Anyone from any background can wear their form of a hijab. [For example,] Jews wear yamakas, nuns wear veils, and Africans wear headscarves and turbans.”

This means cultural appropriation is not associated with non-Muslims wearing the hijab because the practice of wearing a headcover is not restricted to a certain group.

Ahmed points out that the variance in these styles can be related to the area and climate people live in, as “African-Muslims may wear it in a turban style for their hair, Southeast Asians may wear long thin hijabs because it’s warmer there, and colder areas wear thick, tight hijabs.”

Mrs. Miller, a French teacher at Long Reach, also participated in World Hijab Day. She encouraged the HoCo Connected initiative, a service initiative that started through the Long Reach Student Government Association, to participate in this cultural event. The HoCo Connected initiative formed after the controversy with redistricting in Howard County, which generated negative commentary about the county’s population. To promote inclusion, HoCo Connected’s goal is to encourage participation in countywide multicultural events such as World Hijab Day.

Miller says, “I wanted to make a pointed effort to participate in a cultural event and having HoCo Connected there gives other schools insight on how positive our school is.”

Due to the encouragement for students of all backgrounds to participate in World Hijab Day, this booth caught the eyes of Junior Madison Barrett, who participates in HoCo Connected.

“During my lunch, I went to the booth and they told me information about the hijab and even let me put one on,” Barrett says.

Miller says, “I went to the booth and something I learned was that hijab was just another word for scarves–not necessarily based on anything religious.”

This national event was able to start a conversation many are not familiar with. “World Hijab day helped build a sense of community at Long Reach. This is just one activity that was able to do that. Plenty more to come!” Sameer says.

So although Hajaba means to hide, the Muslim Student Association wants to unveil the reality of wearing the hijab, revealing the commonalities between cultural groups and how this practice of modesty is welcoming to everyone!