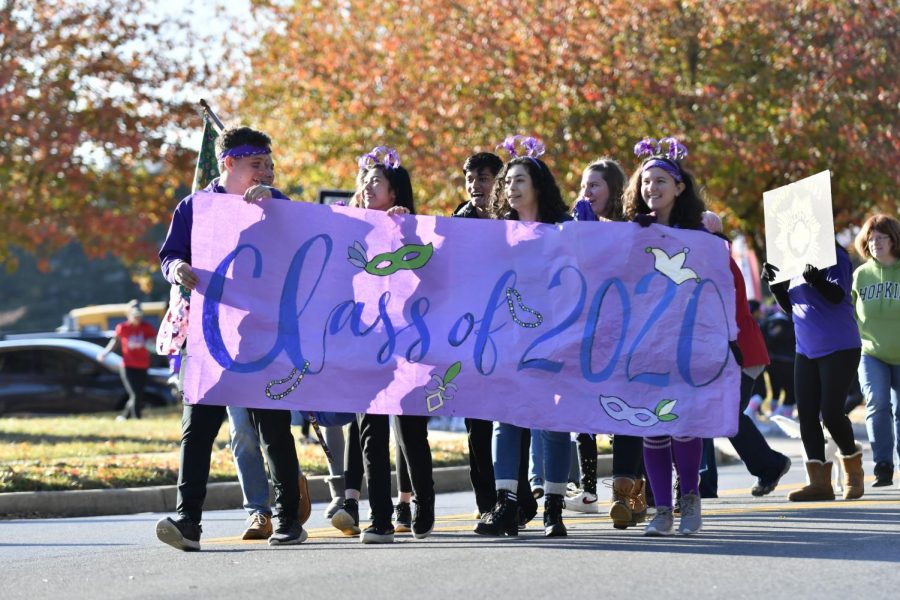 ong Reach kicked off the 2019 spirit week with fun events, contests, and competitions. Most notably, this was the first year of the hallway decoration contest, and the Mardi Gras themed hallways were covered with masks, posters, streamers, and bright colors to spark some spirit.

Junior Trinity Wayad said, “I was happy to see that [the classes] decorated the hallways since we hadn’t done it in the previous years.” The decorated hallways gave participating classes points in the Battle of the Classes and also boosted overall class spirit. Class councils, along with school groups like orchestra and band, were given a hallway to decorate.

“The [Class of] 2021 hallway really got my attention because it had the most effort and was the only other hallway I saw besides the [Class of] 2020 hallway. I’m bummed that the senior hallway wasn’t as decked out and flashy as the 2021 hallway,” said Senior Nikolaus Kolander.

For some students, the spirit days were not interesting or motivating for school spirit: “The days and celebrations were the same as the years prior, so nothing stood out,” noted Kolander.

“Honestly, I wish [the spirit day themes] were different,” commented Wayad. “The last three years have been the same lineup. I think we should switch some of the days, like Twin to Wacky Tacky day.”

Despite the decorating of the hallways, many people feel that the Long Reach spirit seemed to fade this year due to the lack of students participating in the dress-up days and school activities.

“This year there was less spirit than usual. Most of my friends weren’t as invested in this year’s spirit week, viewing it as boring or a waste of time, instead of it being fun. Most didn’t even know what to wear–aside from color day, which many people still didn’t seem to bother with,” said Kolander.

Candy, cars, posters, supporters, and the spirit of Long Reach traveled along the streets of Howard County on October 18th in celebration of this year’s Mardi Gras themed spirit week.

The parade started at 9am on Saturday in the school parking lot, which was filled with teachers, homecoming court members, all of Long Reach’s student clubs, community groups, and students from all decades.

As little children went to scout ahead for the parade, Long Reach alumni from previous years like the class of 99’ held up posters.

“The most entertaining thing with the parade was how the trucks and some groups of students would throw candy towards people and children,” said Kolander.

And although the weather was chilly, performances by POMS, the Color Guard, and the Marching Band warmed the crowds as student groups like Alpha Achievers and many more  threw candy at the crowd and held banners of their respective groups.

“The performances by the band and color guard [were] great, and the music was really well played,” Kolander said, describing some of the performances at the parade. “The music really warmed up the crowd and brought a smile on people’s faces as we watched them go by.”

The parade traveled through Old Dobbin Lane, Tamar Drive, Hayshed Lane, and Stonecutter Road and left participants in the crowd to cheer and sing along as they walked through the neighborhoods.

Kolander explained, “The music at the parade wasn’t the usual songs you hear from a marching band; they played songs that people know and recognized, and the band was having fun with the crowd.”

The band played songs such as “Clarity” by Zedd ft. Foxes, “Shut Up and Dance” by Walk the Moon, “We Found Love” by Rihanna, and more.

The Homecoming dance doors opened at 7pm, the entryway packed with people waiting to be let in. Greeted by the signature colors of Mardi Gras, Long Reach students passed over a small red carpet and through a propped up Mardi Gras themed column and arch as they entered the dance.

“The decorations were spaced out, but it was obvious what the theme was,” stated Wayad before expanding, “it was well decorated–especially the atrium area where they had a bowl of beads anyone could grab.”

“The decorations were nice and creative, and you could tell the theme was Mardi Gras,” agreed Junior Kojo Addo.

Yet, the main entertainment for many was the dancing. Most party-goers floated in and out of the gym and followed the conga line through the event space.

“The music was a mixture for sure,” explained Wayad. “Some of the songs were really colorful and had everyone dancing. Others not so much, but we made the best of it, [or] at least I did.”

Addo said, “the music that was played overall was not good. It [had] very bad choices and did not give everyone good vibes to dance too.”

Kolander added, “The music was pretty good but at some points, it did get kinda boring.” Despite the mixed feelings about the music, the dance went off without a hitch.

Overall, this year’s homecoming continued the traditions of past years and had an impressive turnout for its events. In the future, Long Reach hopes to increase community satisfaction.