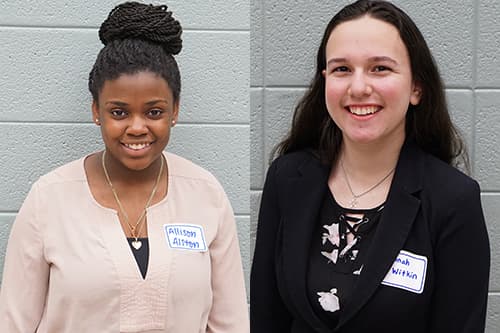 The second annual Howard County SMOB Delegate Convention was recently held to determine which two candidates would be up for the general student election in April. . Although she did not win, Junior Hannah Witkin  represented Long Reach’s first Student Member of the Board candidate to reach the final leg.

While running her campaign, Witkin stated, “I want to be SMOB because I want every student to have that experience where they see their own potential as leaders.I want to encourage students to follow their passions and help them find ways to make changes in their schools and communities.”

The SMOB is responsible for representing all Howard County students and advocating for popular interest in Board of Education issues.

This year’s SMOB Delegate Convention had fourteen candidates and over one hundred delegates who voted for their top two contenders. The students who won the most votes were Witkin and Junior Allison Alston from Reservoir High School. Both members campaigned up until the elections in April.

Witkin did not ever see herself running for the position until near the application deadlines. She notes, “I had no intention of running for SMOB at first. It wasn’t until my teachers and peers started telling me I have the work-ethic and drive to do it successfully that I was able to see that potential for myself.”

Between the convention, which took place on March 1st, and the election, Witkin visited as many schools and events as she could to meet students from all over the county.

“Instead of promising to address the issues which concern students, I want to help them find ways to do that for themselves,” commented Witkin. Another goal of Witkin is to equally represent all students and “[empower] all student voices, not just the typical SGA members or other established leaders.”

Reaching out to students across the county gave Witkin a sense of who she would have been representing. “Having so many students counting on me is a feeling I’ve never felt on this scale before,” she remarked. “It motivates me to do my best work.”

During her campaign, Witkin had limited time to impress the students of HCPSS, and had to work on crunch time to visit as many schools as possible.

Witkin explained, “The campaign [was] ceaseless because there are so many students to reach and [there was not]much time before the election. I also made a website, so people can quickly learn more about me, flyers to hang in school buildings, and business cards to distribute.”

“I understand that it isn’t my job to speak for myself, but to speak for the majority of students, so I will always be open to new ideas, even if I don’t personally agree with them. I never want to seem artificial or distant. I really am just like you!”

The ballots, which were given in middle and high schools on Wednesday, April 24th, resulted in a win for Alston. On her campaign page, Witkin wrote, “I am truly honored to have been paired with such impressive competition. [Alston] ran an amazing campaign, and [she] will be an even more amazing board member. I’m ready to support [her] in whatever way possible.”

Regardless of the outcome, Long Reach is proud to have seen the first SMOB candidate from the school campaign and contribute to a wonderful year of firsts.