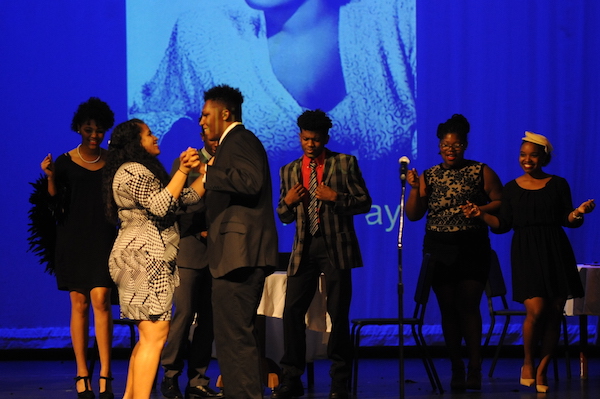 Jazz set the mood to transport students to the Harlem Renaissance, upholding what the cultural movement was famous for: jazz and poetry. Students recited famous poems such as “I too am America” by Langston Hughes and sang musical numbers from famous black musicians such as Billie Holiday. The presentation gave some trivia at the end about black rights activists, civil rights leaders, and black innovators in society.

Senior Chad Ferryman narrated the event and gave Long Reach a look into some famous black icons of this era, including Zora Neale Hurston, Billie Holiday, and Langston Hughes.

“The dancing and the style were the best part of the presentation as we had to change our style from our generation,” said Aria Rhodes who danced in the assembly. Exploring the origin of jazz was one of the main focuses as the presentation expanded people’s knowledge of black culture.

Students also performed skits including an excerpt from A Raisin In the Sun and an innovative presentation taking a look into what the world would be like without black people.

“I believe the best part of the presentation was ‘What the world would be without black people?’ as most of our achievements are swept under the rug,” stated LRHS teacher Mr. Bond. Without black people we would not have great inventions such as the refrigerator, stoplight, or even a running car!

“It gave me an outlook of black race and what people of culture had the potential to do,” said Rhodes.

“Even [in] a place as diverse as Long Reach, we are still blind to what each race has done to advance our society,” stated Sophomore Veronica Hicks.  It is true that some people are unaware of what great things some minorities have done. Some would be surprised to learn that everyday technologies–necessities, even–were innovated by a member of another race. This reminder even gave some African Americans a confidence boost due to that black people can do anything and be anything such as be great musicians, poets, and innovators.

“I think the play empowered me as it told me that I’m a powerful black woman and I can do anything,” explained Rhodes. “It told me that no matter what race you are that you have limitless potential and some people will try not to acknowledge it or not even know,” said Hicks.

Unfortunately, some people could not hear the encouraging messages–literally. Due to audience members talking over the presentation and the participants only sharing one microphone, it was a little difficult to hear or understand what they were saying.

As a whole, the presentation’s purpose was to appreciate the hidden greatness of African Americans, and it was fulfilled. Furthermore, because the event was held during the school day, many more students were able to attend who might not have been able to after school hours.

Looking ahead, Mr. Bond commented, “I hope in the future that we have a presentation like this one for Hispanics, Asians because there’s so many other groups in our school.” As Long Reach students continue to promote and be open to diversity, these hopes may one day become a reality.