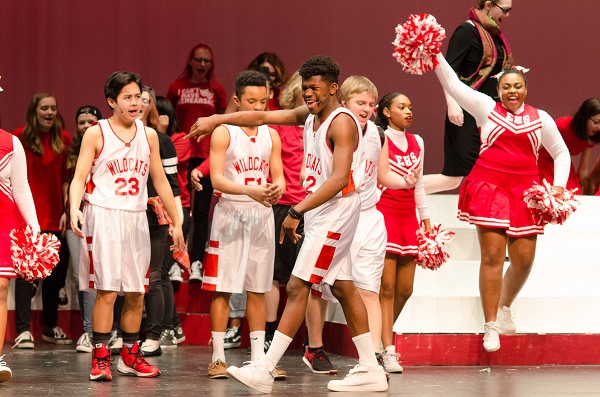 Peter Barsocchini’s original movie, High School Musical, was reenacted by Long Reach students this spring. The cast members put on a spectacular show that is sure to be remembered!

High School Musical focuses on Troy Bolton and Gabriella Montez, played by Freshman Eli Kuperman and Senior Alayna Lightfield, respectively, who dream of acting in their school musical while preparing for an upcoming basketball championship and academic decathlon. The antagonist, Sharpay Evans, and her brother wish to steal the lead role of their musical from Troy and Gabriella.

Freshman Kristine Deiss, who watched the play, commented, “The whole play was very upbeat. The play was awesome!” The play received wonderful feedback from many audience members. “I loved all the songs, and I had a great time,” Deiss added.

The cast members greatly enjoyed performing their play. Kuperman said, “It’s always an adrenaline rush. I love performing and having my love for music and theatre recognized by the audience.”

Sophomore Kendall Broughton remarked, “I felt the overall performance was good. We worked really hard for it and no matter how many little things may have went wrong, we kind of just rolled with it and had a lot of fun.” Broughton was a thespian in the play.

Lightfield received an influx of praise regarding how well she performed. Kuperman commended, “My costar Alayna Lightfield was fantastic because of how astounding she is as a performer. Her comfort on stage is amazing, and she knows how to please an audience.”

“I feel like Alayna did so great; being Gabriella was pretty much made for her,” Broughton hailed. The audience and cast members alike were impressed with how the lead roles performed.

Freshman Joyce Lee, another thespian, complimented Kuperman: “I definitely think Eli deserves a lot of recognition for the amount of respect he maintained for the upperclassmen throughout being casted as Troy, trying his best and proving himself as an actor.”

The cast members are grateful to have acted in the play. “It was so fun. I had such a good time being with the people I had become friends with,” Broughton reminisced on rehearsals.

“It felt really cool to be part of a family that loved acting just as much if not more than me, and I felt really comfortable meeting everyone. Everyone was so different, yet auditioned for the same reason: to have fun,” Lee noted. Acting in the play created many bonds that the actors and actresses are thankful for!

High School Musical was a huge success, and we look forward to the next play from this wonderful cast.