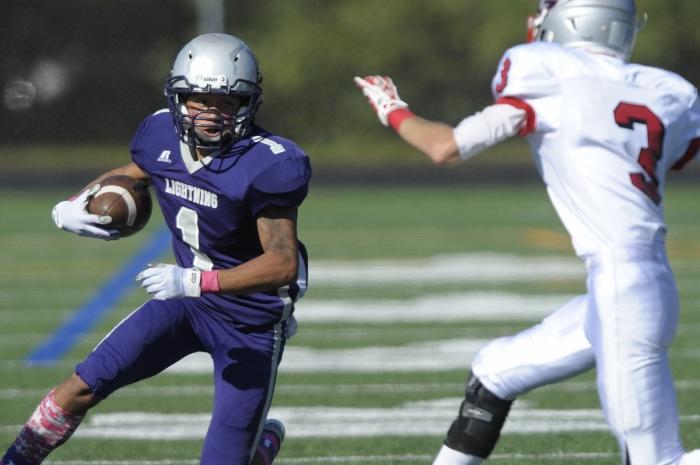 Senior Tyler Raines throws hard to Senior Jalyn Hall, who bolts for the goal line–and crosses it, ball in hand. The crowd explodes in a flurry of screams, arms, and purple facepaint. This is just one of the many touchdowns the Long Reach varsity team has made this past season.

Long Reach began the season with a 7-0 win streak–a feat which has not been accomplished since 2004, which boasted a 4-0 record. The effects of the string of successes are visible throughout the school. Sophomore Allie Harrison says seeing touchdowns made is rewarding: “That’s my school making a comeback.” Long Reach has had a longstanding bad reputation for past score records, so the successes are all the more valuable to the students of Long Reach.

Harrison reports that at the last game she went to, the “atmosphere was just as excited and loud and contagious” as it had been previously. The stands as of late are always full of plastic beads, pom-poms, and plenty of purple clothing (ranging from tutus to bandanas to T-shirts) all being brandished by the enthusiastic and screaming audience.

“We [the 2017 senior class] wanted to make memories and so far we’ve done that…With the boys doing great this season, it makes it even easier. Games are rowdy and exciting, but that’s how it should be,” says Asha Rogers, senior.

The sudden success may be attributed to the varsity team’s new lineup. “We have 35 new faces on the varsity football team,” reports Coach Willis–impressive given that there are only 49 players total. “Thirty of those [new] players played on the JV team last year, which helped us win the JV championship… The young players have an example [in the former JV players] of how they should practice and play.” Clearly, the ex-JV players are bringing their past successes with them.

But the arrival of the new players is not the only cause for the team’s outstanding performance as of late, according to Coach Willis. “We attribute our success this year to the players’ hard work, dedication and love for each other… So, no matter [what] the score is, our players are going to fight until the final whistle.”

The players are not the only proud ones. Students are evidently carrying their pride for the school off the field. The atmosphere within the school itself has completely changed–gone are the days of being seen as the “loser school,” and bitter seniors grumbling about the failure of our teams are practically nonexistent.

“Our school has a lot more spirit this year, mainly due to our football team doing so well. They give us all something to be excited about,” notes Senior Lauryn Reynolds.