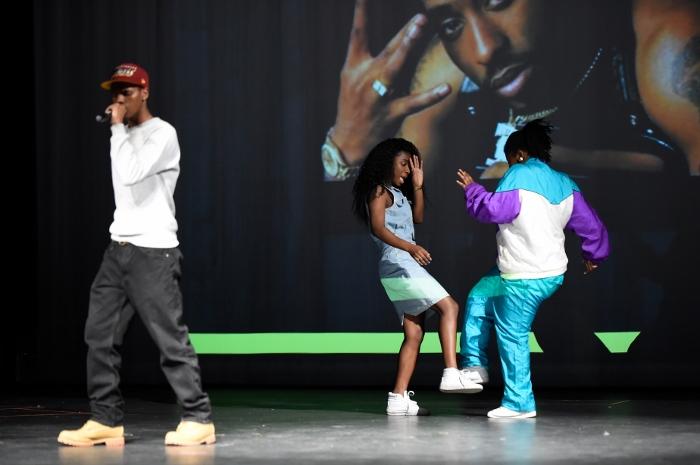 An Ode to Black History

Students showcased their unique rhythm, style, and flow at the first annual Poetic Justice event held at the school’s auditorium on February 26th. Poetic Justice was a compilation of skits including singing, dancing, rapping, reciting poetry, and acting to commemorate Black History and pay tribute to recent tragic events which have gained nationwide attention, such as Freddy Gray. The event was sponsored by Ms. Covington, Ms. Washington, Ms. Grice, and Ms. Lipscomb.

The timeliness to current events was one reason why Ms. Covington felt the event would attract students. She said, “It is a voice of what’s happening today; it is the result of things going on today like Freddie Gray, in a peaceful way.”

Participant Devyn Sanders, a senior, said what he hoped the crowd would get out of watching was “Entertainment and more Black History. It’s about past and current events.”

Apart from learning about Black History and modern times, Poetic Justice indeed gave students a platform to reveal their talents and entertain the student body.

Sanders did a little bit of everything that night; he sang, recited poetry, and performed choreography.

Singing was a signature part of the event, as one of the messages the staff tried to communicate with the crowd was change through vocalization and taking the proper steps forward as people to make the world a better place. One way that was achieved was with the song Man in the Mirror, by Michael Jackson, which was sung by Sanders. This song represented self-evaluation and making a change.

Another sentimental song was Power. Sanders said, “Power signifies that Black is a strong race and that we’re still fighting.” Both songs signified the main theme of the night, which was growing as a people.

After the crowd left and the curtain closed, all performers had time to reflect on their  performance and the show’s success. Junior Kameron King said, “I liked how we established Black people and how iconic they were in America, and the changes they made in the U.S.”

There were many unique and creative parts of the show that emphasized King’s point, such as the skit about how life would be different without Black people. For instance, we would have no shoes, no air conditioning to keep us cool in the hot summer months, no combs, brushes, or even traffic lights. We can thank people like J.P. Knight and Frederick McKinley Jones for that.

Despite the great message and entertaining fashion in which it was delivered, the auditorium was not too full, and King noted that, too: “I would have liked if more people came because we did point out important people in Black culture that people may or may not know about, and they would’ve learned about it in an entertaining way.”

King’s suggestions for improvement included being “a little more organized” and for all participants to take it “a little more seriously [for] what we were representing.”

Nonetheless, he acknowledges, “It gave me a platform to speak about Black people and poetic justice. I felt like I represented Black people in a poetic way.” Undoubtedly, Black people and culture were expressed imaginatively and emotionally.

It seems as though those who were in attendance learned a great deal about life, Black History, and the world, and learned it in a fun and entertaining fashion. That alone put Poetic Justice it in a class of its own, in terms of school productions.