A Galaxy Near You

A long time ago in a galaxy far far away… there were only six Star Wars movies. With the December 2015 release of The Force Awakens, fans are once again caught up in Star Wars mania, and for good reason.

The new movie, The Force Awakens, features old friends (Luke, Leia, Han, Chewbacca) along with new characters (Finn, Poe, Rey) who are on a mission to save the galaxy from the First Order. Through epic battles and shocking plot twists, they fight to complete their mission to destroy the First Order. 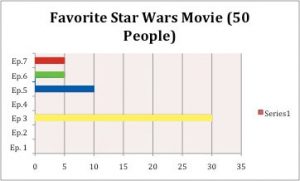 The new film also features a soundtrack that blends well with the various events in the film and carries on the Star Wars feel and theme of the movie. The instrumental score during the climax of the movie makes plot events far more intense than it would be without it. Furthermore, the special effects, lighting, and overall camera work in the movie is fitting for the mood that the movie is trying to create. The lighting with the glowing swords in the blizzard during the final battle sequence creates a fitting mood for an intense and dramatic scene.

In fact, the new movie has sparked debates on whether the new film is better than the original six. Junior Garrett Bowman says, “If the next two movies are like Episode 7, I believe the new ones will be better.”

However, Bowman mentions, “I like the old ones because I grew up with them; they have a special spot in my heart.”

Fellow Junior John Kohnen said, “I prefer the old one[s] due to the outstanding visual effects and impeccable acting.”

Despite many compelling arguments for both the old and new movies, there seems to be an agreement on one aspect of all the films: the characters.

“I enjoy the new characters very much. Their acting is very authentic and fit the Star Wars theme nicely,” said Kohnen.

“I like the new guys because they are the continuation of the old movies,” said Bowman.

However, Chemistry teacher Mr. Renehan thinks that the new movie missed out on potential riveting stories to further develop the new characters. “They could have had the story of Poes and his adventure, but instead, he just crashes and magically reappears [again later],” said Renehan.

Many fans have enjoyed the new movie. However, the old movies seem to remain the favorites, as Mr. Renehan attests, “The new one is good, but not as good as 4, 5, and 6.”

Despite this, is it fair to judge one movie against six? When the next two movies come out, will opinions change? Only time will tell.

This argument may divide the Star Wars universe, but in the end, Star Wars is Star Wars. No matter what time period you live in or how far away your galaxy is, we may never find  another movie series quite as unique as this one.