President Biden has now surpassed the threshold of 100 days in office, and while over 3 months worth of time isn’t enough to get everything he promised done, what has he accomplished? 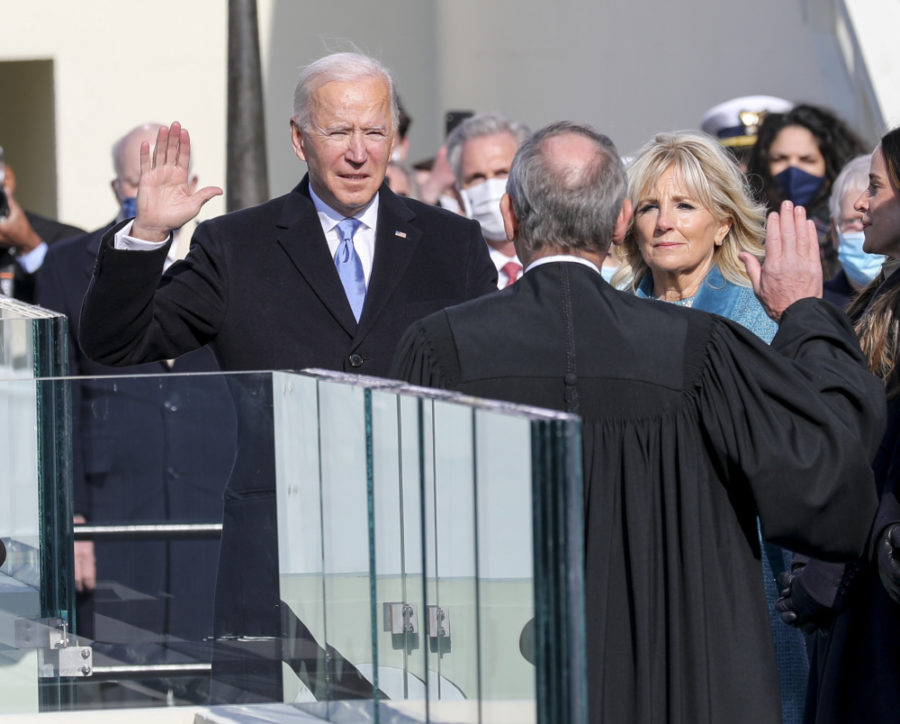 And with those words a verbal agreement was made and a contract was bound. A contract to honor and serve the American people who had graciously bestowed him to the office.

As of now, President Biden has been in office for more than 100 days. During this window of time, he has honored many of the promises he made while campaigning. Most were through executive orders signed at the White House, with some others requiring the slim Democratic majority of Congress to pass bills addressing more substantial promises, all in efforts to honor the agenda Americans had chosen him to pursue.

Biden serves as President within one of the most polarizing, tense, and divided times in US history, with some within the opposition even going as far as to storm the Capitol Building to obstruct electoral certification. Now that the issue of whether he can be President is settled, the question is what he can get done. With a slim majority in the House and essentially a stalemate in the Senate, it appeared to be not much at all, which is what made the accomplishments that have been done so far, remarkable.

Within the month of January alone, he’s addressed one of the more pressing issues at the moment, the pandemic. Through executive orders and memorandums, he’s established a new role in the White House, Coordinator of the COVID-19 Response, in addition to rejoining the WHO. He’s also immediately rescinded the “Muslim ban” and the ban on transgender people from joining the military, and reversed the family separation policies at the border.

For consecutive months, in February all focus was on the passage of the American Rescue Plan Act, which also addresses the pandemic and the economy reeling from it. By March, the act was passed and aid was distributed to states and small businesses. During this month, the milestone of 100 million vaccinations was also surpassed. The next two months were very minimal in terms of resolving any promises. In April, Biden created the bipartisan commission to look into reforms for the Supreme Court and in May, a plan to reduce emissions was published in order to re-enter into the Paris Climate Agreement.

For Nathan McClure, a junior here at Long Reach High School, they don’t see anything particularly wrong with what Biden’s doing now. “Most of these are things I believe are beneficial…” Their one criticism is that it doesn’t seem like enough.  Biden has capitulated on one of his promises: implementing mask mandates. His approach was to instead ask states to maintain and implement their own mask mandates, rather than push for a federally-enforced one. Success was only found depending on the controlling party of that state. Texas, for example, was the first state to remove their mask mandate, all the way back in March. While in a democratic party controlled state like New York, most likely they already had a robust mandate in place. This compromise on mask mandates isn’t popular at all with McClure, stating “I’m not happy he compromised there.”

It seems that this strategy isn’t going away. With Biden putting his focus onto getting an Infrastructure bill passed, he’s started to make concessions with Republicans, all in order to get the bill passed. “He has compromised and not pushed on certain things as a whole,” said McClure. He has a mandate after all. 7 million more people voted for him in the popular vote, he acquired a majority in the House, and when it came down to two seats in the Senate in order to have a mandate, the people gave those seats to the Democrats. He and his party have the people backing them and could do it without the Republicans, yet still seek to cooperate with them.

However, it’s only been a little bit over a 100 days into Biden’s Presidency, and whether this trend will stay remains to be seen. He’s promised a lot already and has 3 more years to get it done: End the federal government’s use of private prisons and detention centers, institute background checks for all sales of guns, raise the corporate tax rate to 28%, among other things. McClure has one promise in mind they’d like to see addressed expeditiously: “I’d especially like to see him update the Voting Rights Act,” while on other promises they feel less enthusiastic: “I believe that #2 [End federal government’s use of private prisons and detention centers] is fairly impossible due to heavy lobbying by prison-based industries.”

While some right now feel similarly and others feel as if he’s taken actions to damage the country, it remains to be seen if he’ll follow through with all of his promises and solutions. Yes, he’s been keeping some promises; it’s only been 100 days, and there’s more than enough for him to get done within his term. What’s for certain, however, is that he’s had good intentions with regards to his approach. He’s pushing for these changes for the good of the country and its people, the ones who so graciously bestowed him to the office.