The 66 Holidays of December 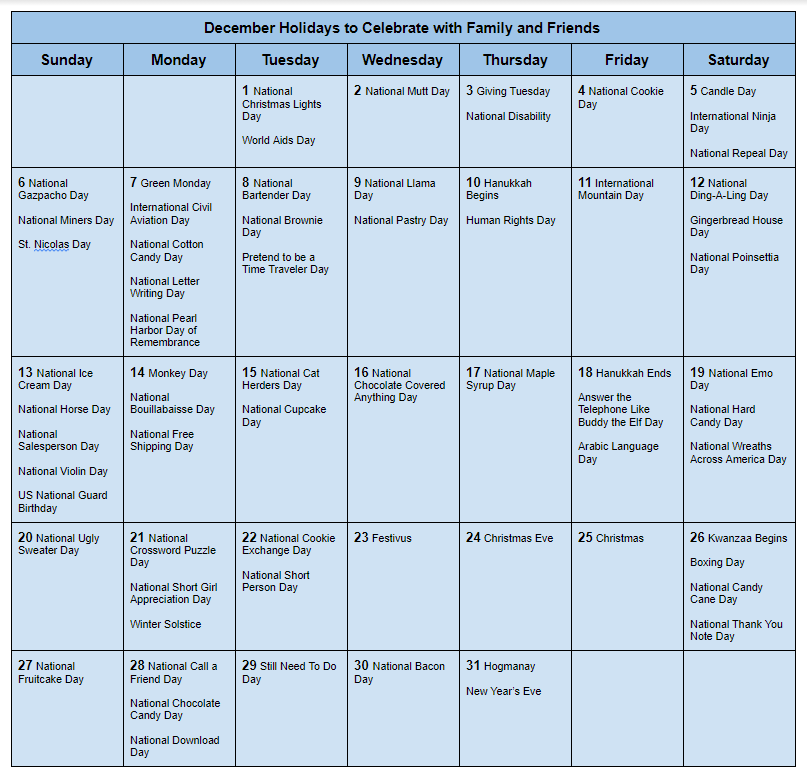 You’ve most likely heard of Christmas, Easter, and Halloween. With popular holidays like these, there are many reasons to celebrate throughout the year. But have you also heard of National Umbrella Day, National Sandwich Day, or even a National I Love Lucy Day? Yes, these might sound random, and even a bit absurd, but they are real holidays celebrated each day of the year.

So, how did these days come to be? Many national days begin with online calendars, such as National Day Calendar and Days of the Year, that list them as “holidays.” These sites present anywhere between 1,200- 1,500 “holidays,” some gaining more popularity than others through social media hashtags and trends. They are further promoted through journalists, marketers, and local businesses for multiple reasons such as bringing attention to their business. Many are invented by companies and organizations trying to create attraction for the products they sell.

The United States itself acknowledges only a few national holidays. These holidays have broken down to government-sanctioned national observances such as Mother’s Day or Flag Day, but even then, there are not too many of those either. The rest of these daily celebrations came about in a variety of ways. “National days” are sometimes created through presidential proclamation or House and Senate resolutions. For example, National Ice Cream Day was a signed proclamation made by President Ronald Reagan in 1984. Though this was meant to be a one-time thing, ice-cream shops around the nation still use it to their advantage. 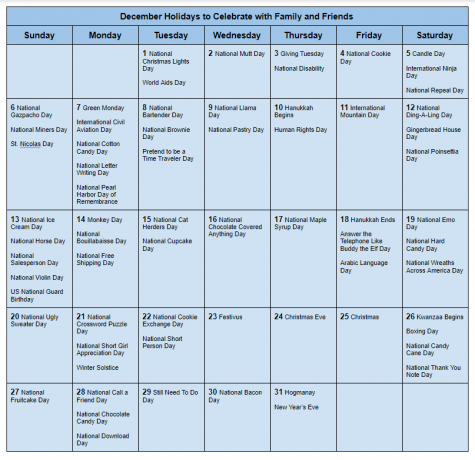 When speaking about the origin of these days, Marla Anderson, founder of National Day Calendar, told Tampa Bay Times that only a small portion of these celebrated days are made official through the government. She mentioned that some may have been declared through a state, city, or county, and somehow circulated around the country, while others are rooted in history and local traditions.

Can just anyone create a national day? As mentioned before, not all national days have to be established by the government. When recalling how he created Say Something Nice Day, Mitch Carnell mentioned to Marketplace that he submitted his idea in 2006 to Chase’s, which, like the National Day Calendar site, acts as a monitor for national days and months.

Marlo Anderson, co-founder of the Chase site, revealed that any individual or company can declare a national day, though many are not approved. Anderson told Marketplace that in the last year they received over 10,000 requests, only to choose 20-25 days to make official. On the basis of choosing the days, he explained that “They’ll focus on iconic items over brands — say, National Coffee Day as opposed to National Starbucks Day … and they look for things everyone can enjoy or be a part of.”

Despite the intention to be celebrated, some people claim these days to be unnecessary and a waste of time. Brendan Clarey, contributor to USA Today, told the news source that he already has enough trouble remembering and keeping track of important dates of anniversaries and birthdays. He states that he doesn’t need the burden of random “holidays” that are made by complete strangers on the internet or corporations trying to sell their products, describing these celebrations as “nonsensical” and “downright bizarre.”

Nevertheless, whether you want to or not, these days give people the opportunity for celebration and to appreciate the little things everyday, no matter how outlandish they might be. So keep your eye out, you might find the next trendy thing to celebrate while scrolling on social media or walking past a store. And who knows, maybe you can create your own national “holiday.”