The Lightning Flash • May 5, 2020 • https://lrhslightningflash.com/2974/critics-corner/all-good-things-come-to-an-end/

All Good Things Come to an End 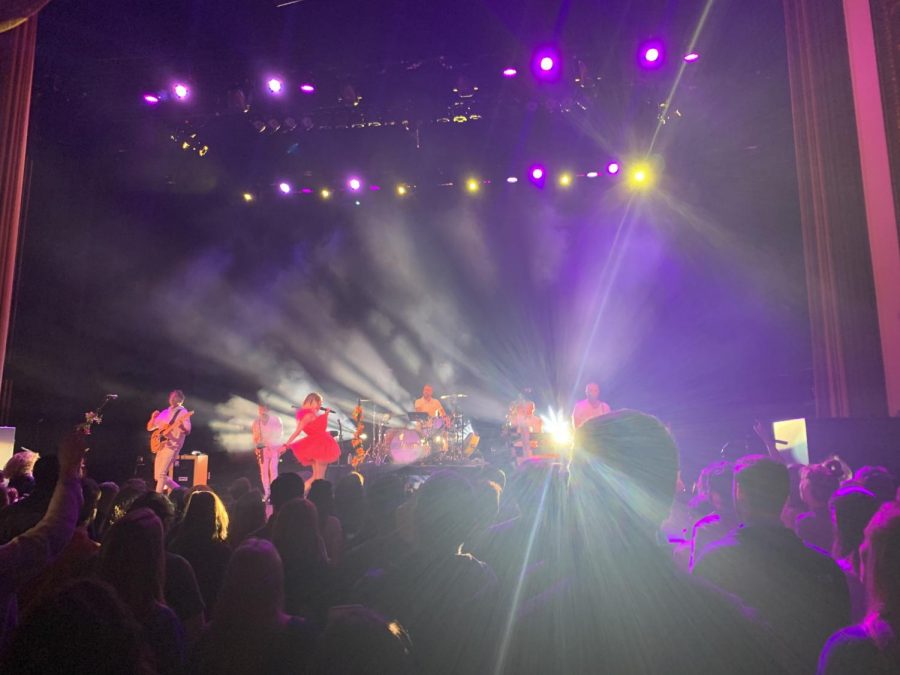 MisterWives on stage at Lincoln Theatre in D.C. Photo courtesy of Tori Ely.

Whywhywhy is what audience members were thinking when members of the band MisterWives brought a dramatic end to their December 13th concert.

The band of six New Yorkers closed off their “No Place Like Home” month-long tour with a sold-out show in Washington D.C.’s Lincoln Theatre.

MisterWives has been involved in the music scene since their first show in 2013. Defined under the indie-pop and alternative dance genre, they have released two albums and two extended plays, the most recent of which being the basis of their 2019 tour.

“Whywhywhy” and “the end” were the debut songs off the EP that was released November 8, 2019.

Lincoln Theatre, located on U-Street in D.C., was the venue for the band’s December 13th show. Other events that were held in the same location that month included orchestral performances and comedy nights, all of which require seating for patrons.

Usually, MisterWives performs in venues that are general admission and all standing room, which means that the Lincoln Theatre was a change in speed for them.

Lexi Heber, a student at Howard County Community College, stated, “I didn’t like the seats in the theatre because there was no standing room, but I thought the higher seats were a good idea.”

However, Ronnie Matthews, a junior at Chesapeake High School in Anne Arundel County, described the venue as regal and classic.

In terms of the band’s usage of the venue, Long Reach Sophomore Carmen Lloyd enjoyed the “colorful lights and garden set-up.”

Though the venue had both its positives and its negatives, the three concert attendees were all satisfied and entertained by the band itself.

I have been a fan of MisterWives for five years and attended six of their concerts in the past; each of their shows was more exciting and fun than the last. My three guests for the evening, however, were all new to their music, sound, and energy.

Heber commented, “I wasn’t familiar with the music, but I felt like I’d been a fan for years.”

However, Heber did not only have positive feedback about the show. As a musician herself, she thought that the opening act, Tessa Violet, did not contribute much to the evening, stating, “She [Tessa Violet] has hype online but wasn’t good live. She played the same two chords on guitar over and over again.”

Matthews agreed, describing Violet as a “static performer without a lot of stage energy.”

Besides the opening act, the attendees were singing the band’s praises.

It was Lloyd’s first concert, and she regarded the night as one with a “very energetic and happy vibe…they [MisterWives] really kept us moving and dancing.”

MisterWives certainly will get the audience dancing whether it be by choreographing their own dances, playing upbeat songs, or showcasing their bubbly lead woman, Mandy Lee.

Lloyd believed, “The lead singer [Mandy Lee] has such an amazing voice; I was blown away.”

Lee was not the only reason behind the show’s success. Heber, a self-proclaimed concert veteran, commented, “I liked the audience interaction…we all felt like we were a part of the show too, not just spectators.”

At the end of the show, MisterWives surprised everyone in the audience by carrying their instruments off the stage and into the audience for a dramatic encore.

In a routine similar to that of a marching band, the saxophonist, trumpeter, guitarist, bassist, and drummer paraded around the theatre while Mandy Lee performed on stage. When the audience was focused on the path of the other members of the band, Lee ran down the aisles of the theatre and out into the audience.

Lloyd said, “My favorite part of the concert was definitely coming close to the singer and being right there next to the band. I loved that.”

Matthews also enjoyed this aspect of the show, stating, “I’ve never seen anything like it at any of the concerts I’ve been to. It was awesome.”

Though the D.C. concert was the band’s last for 2019, MisterWives announced an upcoming album and tour in the near future where they will surely continue to surprise, engage, and entertain the audience.