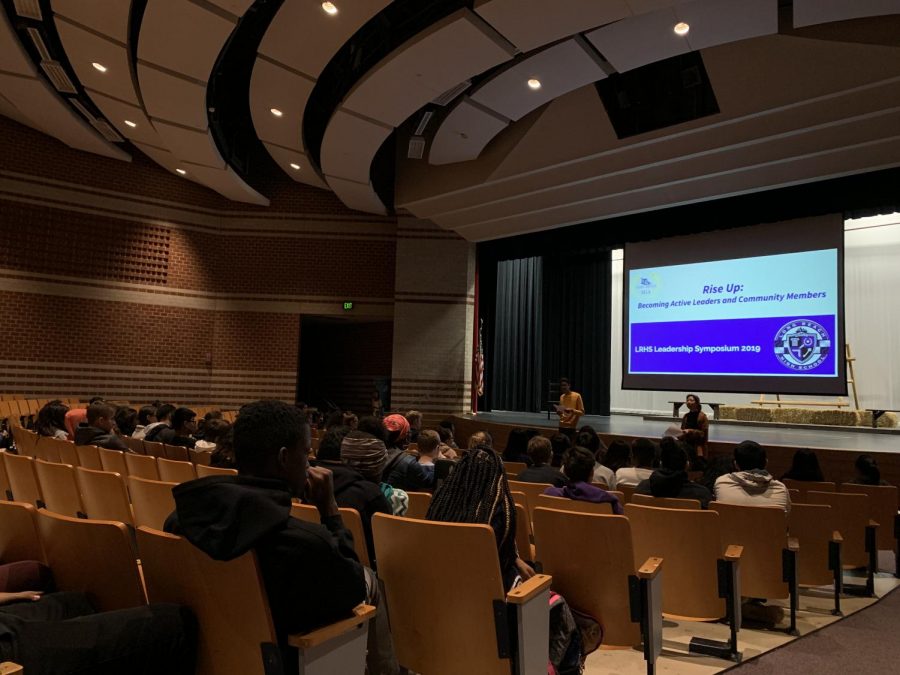 “Leaders are made, not born.” Principal Wasilewski’s words echoed through the auditorium at LR’s 2019 Leadership Symposium. Establishing the theme Rise Up, the event took place after school on the last day of the first quarter and a half-day, November 1st.

Leadership Symposium is an annual event hosted by Long Reach’s Student Government Association. It takes place after school on one half day in the year, and it consists of a guest speaker and different workshops, led by students, all in an effort to promote leadership in the Long Reach community.

The event began in the auditorium with the introductory speech from Principal Wasilewski, who first welcomed students and then touched on the meaning of leadership and the importance of the event. Seniors SGA President Alex Eapen and Vice President Joyce Lee offered encouraging words to the new student leaders and then introduced the guest speaker, Bloom CEO Dr. Stephanie Akoumany.

Dr. Akoumany gave students an inspirational message about working hard to achieve their goals and made the event interactive by asking the audience questions about their experiences with leadership, turning the event into a conversation rather than a lecture.

“I think she’s good at what she does, and her message was definitely something I needed to hear,” commented Junior Michelle Caternor, who attended Leadership Symposium. “It resonated with me a lot because I was working on starting the Helping Hands club.”

“I liked how she summed up most of her points without repeating herself too much [while] getting her point across,” reflected Sophomore Kelly Song. “She taught me about how to become a leader and where to start in terms of starting a club.”

After the keynote speaker and a lunch break, students were taken to the atrium, where they participated in icebreakers in small groups and as a collective whole.

The first icebreaker, “Splash,” was intended for students to learn each others’ names. In small groups, someone would call another student’s name out and the other students had to high-five before the person who was named ducked down. In the second icebreaker, “Amazing Race,” all of the students were seated in two lines and had to squeeze the hand of the person next to them after their hand was squeezed. Whichever line reached the last person first won.

Caternor remarked, “The icebreaker games that we did helped me loosen up in the setting and be more comfortable at the symposium.”

“[“Splash”] helped me learn people’s names, and since I was in the middle, I got to experience how to lead my group in the game,” noted Song. “It prepped me to start discussions and conversations with new people.”

Next, students chose the workshops they wanted to attend. The options included “Don’t Hate, Debate,” “Taking Initiative In Group Settings,” “Quick Thinking,” and “Starting A Club.” In the past, students were given a predetermined order of workshops based on their first choice and a colored sticker attached to their name tag. This year, students were allowed to choose the workshops in their rotations. This also allowed students to attend the podcast, which was held in the media center.

Attendees split into their different workshops, led by SGA members, which lasted 20 minutes. Each followed the general format of introduction, content and lecture, activity, and closing discussion.

Caternor stated, “My favorite workshop was the one about starting a club because I recently started a club, and the advice that was given was helpful, and I can apply it to myself.”

“My favorite workshop was the one about making a new club within the school,” said Song. “I’ve been wanting to start a club, and this workshop taught me where to start and how to get the help to do so.”

She continued about the same workshop, “I also enjoyed the game where we had to describe the word without actually saying the word; I thought it was fun.”

During the first hour of workshops, which spanned two workshop-lengths, the podcast with Dr. Akoumany was held in the media center. She continued from the keynote speech about her company, Bloom, which is focused on helping youth achieve their leadership potential.

After the workshops, students gathered in the cafeteria for the closing remarks and SGA announcements from sponsor and French teacher Mrs. Miller. Students then submitted their workshop reflection sheets into a box for a raffle to win a gift card, and the winners were chosen on the spot after shaking the box to randomize the options.

Based on reviews, students appeared to have enjoyed Leadership Symposium and learned useful knowledge on leadership skills and how to become more involved in school events and activities. All in all, a huge success!

How Good Are Your Leadership Skills?

Rate your agreement from 1-5 (1=poor, 5=strong), and count up your total points at the end.

When assigning tasks, I consider people’s skills and interests.
I do not expect top-notch results from people.
When someone is upset, I try to see how they are feeling.
Team morale is important to me.
I don’t take criticism personally or to heart.
People should be encouraged to step outside of their comfort zone and challenged to learn new skills.
I make time to learn what people need from me for their success.
I make exceptions to my rules and expectations.

30-40 points: Your leadership skills are great! Take your skills to the next level by applying for leadership positions and attending HCASC meetings and Maryland Association of Student Council conferences.

19-29 points: Your leadership skills are moderate! Continue to build your skills by stepping outside of your comfort zone and applying for leadership positions, as well as attending Howard County Association of Student Council (HCASC) meetings once a month.

8-18 points: Your leadership skills need improvement! Practice leadership in the classroom before expanding to more situations, such as taking initiative in group settings and answering the teacher’s questions. Try attending SGA meetings once a month.