One Pea, A Lot of Mattresses

Once Upon A Mattress 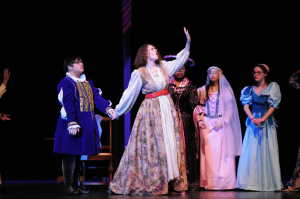 “A pea under twenty mattresses? No wonder I’m black and blue.”

Long Reach’s drama department started 2017 off with the charming, quirky play Once Upon A Mattress. The play is a parody based off of the story The Princess And The Pea. Filled with catchy songs and an undeniably talented cast, there was no better play for Long Reach to put on.

Even many Lightning alumni came to watch. Brendan Berndt, class of 2015, said, “Once Upon A Mattress was special to me for a few reasons. Being a former Long Reach drama student, I’ve performed in countless productions, but none like this.”

Berndt raved, “It was light and upbeat. It was a play not to take too seriously, and I think that made everyone step out of their comfort zones.”

Once Upon A Mattress is more comical and light compared to Long Reach’s previous fall productions such as 2014’s A Raisin In The Sun and 1984, or 2015’s 12 Angry Judges, but it was not one to miss.

Senior Alayna Lightfield, who played one of the leading roles, expressed, “This play may be characterized as a parody, but what I think made it hard to miss was our cast. They had the ability to keep your eyes glued to the stage and laughing all at the same time.”

Lightfield played the overbearing and controlling queen who did anything in her power to make sure her son did not marry.

“This production was definitely different for me. It’s the first time I played a villain, and it forced me to channel this sassy alter ego I didn’t know I had,” said Lightfield.

Her sassy alter ego was hard to miss. Lightfield held the audience’s attention as she bossed her fellow cast mates to obey the queen’s orders. “Alayna and I have starred in a few productions together, but this was one of my favorite roles of hers. I’m so used to seeing her play the protagonist; it was sort of refreshing to see her change it up,” said Berndt.

The leading roles of this play were not the only ones to watch. Many of the townspeople and princesses may have only had a few lines but still brought the play off paper and to life.

“I think many people overlook the smaller roles in plays, but without them I don’t think I would have enjoyed the play as much,” expressed Senior Albert Kim. “The leads were outstanding, don’t get me wrong. However, the people with smaller roles had less lines, and I feel like they were able to take those lines and make it their own.”

“Without a doubt, I’m proud of musical theater,” gushed Lightfield. Once Upon A Mattress not only left people laughing, but it left people proud of their school. It took a simple play and made it a production.

Thanks to Sophomore Alexandria Harrison for aid with image captions.